The winners of the 11th annual Boots Maternity & Infant Family Awards were revealed at a gala luncheon on Friday 12th October 2018 in the Royal Marine Hotel, Dún Laoghaire.

The awards not only recognise the very best products in the industry, tested by parents for parents, they also celebrate the unique stories of some very exceptional people.

Incredible people who have gone above and beyond their call of duty, or who have overcome difficult situations were also recognised.

Family members and professionals like Iarla Hennessey the Sudocrem Miracle Baby of the Year; Maxi-Cosi Dad of the Year, Stephen Murphy and Canavan Byrne Early Educator of the Year, David King among others.

Active Iron was awarded Bronze in the Best Pregnancy Supplement category. It was the only iron-only product to be recognised. 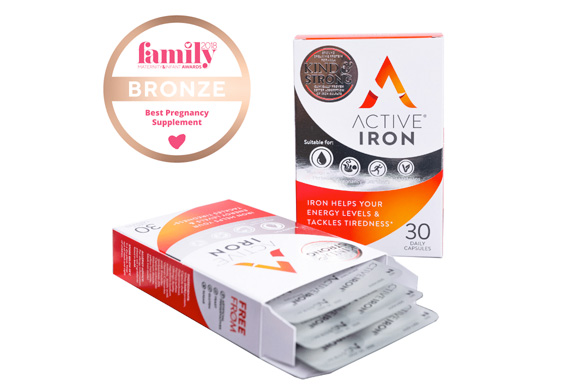 Iron supplements could benefit pregnant women who are unable to meet their dietary iron requirements however, the current iron oral preparation market is dominated by a range of poorly absorbed and poorly tolerated products.

Active Iron was developed in response to the global need to produce an iron product that is both tolerable and easy to absorb.

Active Iron’s technology uses a unique iron-whey protein complex to ensure iron is released in the small intestine (at the DMT-1, the body’s normal iron gateway), where it is most readily absorbed, instead of the stomach where it causes oxidative stress and triggers gastric side-effects.

Studies confirm the new Active Iron formulation doubles the amount of iron absorbed compared to iron sulfate, while being so gentle on the gastric system it can be taken on an empty stomach.*

Active Iron is suitable for use during pregnancy and breastfeeding. It is also suitable for vegetarians, free from artificial preservatives, yeast, gluten, and sugar.