Why do women need more iron than men?

Iron is essential to life for both men and women; it helps reduce tiredness and fatigue, as well as playing an important role in normal energy metabolism, oxygen transport, cognitive function, immune function and formation of red blood cells. However, iron is especially important to women – particularly those of reproductive age – as women need up to twice as much daily iron as men.

Menstruation is the most common cause of iron loss worldwide. On average, women lose around 220 to 250 milligrams of iron per pint of blood during each menstrual cycle (the total loss of blood can be up to half a pint). As such, it is particularly important for woman of childbearing age to meet their daily iron intake However, this may be difficult to achieve through diet alone.

Benefits of Iron During Pregnancy

Pregnancy also impacts the overall iron content in a woman’s body. As a woman’s blood volume increases when she’s expecting, dietary iron requirements can also rise especially in the second and third trimesters. This is because the body uses iron to make haemoglobin to transport oxygen to other cells. If a woman doesn’t get enough iron, the body may find it difficult to produce the correct amount of red blood cells it needs to make this additional blood for the growing foetus. Women who experience morning sickness or who are carrying more than one child may even need more iron than they can ingest from diet alone. 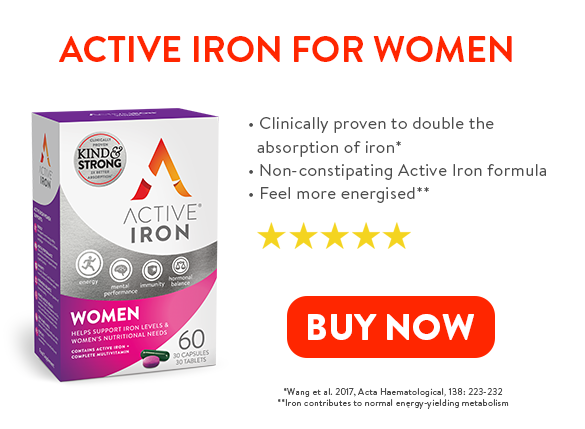 Sources of Iron for Women

It’s important to remember that even if a woman makes a conscious effort to ingest more iron from food, it still may not be sufficient to meet the daily requirements. There are two different types of iron found in food: haem and non- haem iron. While haem iron is found in animal proteins, most health authorities recommend a safe upper intake of just 500g of red meat per week. Furthermore, non- haem iron – which is found in plants, nuts and legumes – is absorbed at a much lower rate than meat-based sources. Additionally, other daily habits like drinking tea and coffee after your meals can further reduce your iron intake, due to the tannins present in these beverages.

Although food supplements are not a substitute for a varied diet and healthy lifestyle, taking a daily iron supplement like Active Iron can be a great way to ensure you are getting the correct amount of iron in your daily life. As Active Iron targets the natural site of absorption and delivers just the right amount of iron when you need it, it may help women who need to support their iron intake but struggle with the negative side-effects of traditional products. Active Iron is kind enough to take on an empty stomach while doubling the amount of iron* absorbed compared to Iron sulfate. 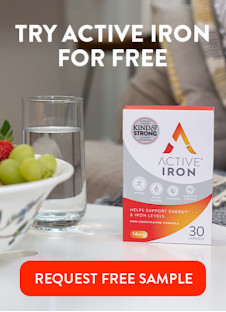 This website uses cookies to improve your experience while you navigate through the website. Out of these, the cookies that are categorized as necessary are stored on your browser as they are essential for the working of basic functionalities of the website. We also use third-party cookies that help us analyze and understand how you use this website. These cookies will be stored in your browser only with your consent. You also have the option to opt-out of these cookies. But opting out of some of these cookies may affect your browsing experience.
Necessary Always Enabled
Necessary cookies are absolutely essential for the website to function properly. These cookies ensure basic functionalities and security features of the website, anonymously.
Functional
Functional cookies help to perform certain functionalities like sharing the content of the website on social media platforms, collect feedbacks, and other third-party features.
Performance
Performance cookies are used to understand and analyze the key performance indexes of the website which helps in delivering a better user experience for the visitors.
Analytics
Analytical cookies are used to understand how visitors interact with the website. These cookies help provide information on metrics the number of visitors, bounce rate, traffic source, etc.
Advertisement
Advertisement cookies are used to provide visitors with relevant ads and marketing campaigns. These cookies track visitors across websites and collect information to provide customized ads.
Others
Other uncategorized cookies are those that are being analyzed and have not been classified into a category as yet.
SAVE & ACCEPT

Hello, looks like you're visiting us from the United States!